Sometime in June of this year, we conducted a simple survey among the members of our online support group namely, Let it Echo Heart Families (Cebu-based) and Heart Warrior Philippines (Manila-based). On top of that, we also researched for additional data from different government agencies through the FOI or Freedom of Information website. And for World Heart Day, we will be sharing the data that we got so far.

For part 1, we will be sharing the output of the survey we did among our members, and the second part, will be on the research data we got from FOI and our realization after all these data gathering.

The survey had a total of 249 respondents for the time the survey was conducted. It was conducted online via Google Form and were answered mostly by parents of kids with CHD.

NCR or the National Capital Region is where we can find the few heart centers that would cater to pediatric cardiac patients. From the graph on the left, we can see that we have a good mix of patients when it comes to where they are located in the Philippines with respect to access to surgical intervention.

From this graph, we can see that majority of the patients birth order belonged to First or Second born. We can say that the families who participated here are relatively young or starting out families.

3. Age of Diagnosis vs Income Type

This graph shows us 2 things - the income type of each household and the age of diagnosis of patients, whether they have had surgery or not.

And as for the age of diagnosis of the patients, majority of them were diagnosed less than 3 months after birth.

This graph shows us that out of those single income households, majority of the caretaker of the patients are mothers.

For the occupation of either parents, we gathered varied occupations. In order to group them, we assigned categories for different kinds of occupation:

a. Houseband / Housewife for those unemployed.

b. Professional for those kind of occupation wherein the position will need a specific license in order to perform it (i.e. doctor, engineer, teacher, nurse, architect, etc.)

c. Non-professional for those occupation which anyone can do even without a special license (i.e. sales associate, encoder, marketer, company driver (getting a driver's license is in a different level from getting PRC licenses), call center agent, manual laborer, etc.)

d. Self-employed for those who have their own businesses, freelancers and anyone who manages their own time.

e. OFW have their own category due to income capacity.

And more than half of those patients whose father belongs to the non-professional group have not had their surgeries yet as of end of survey.

This graph shows that out of the 249 respondents, almost half have had their surgeries already, and the other half have not. A very small percentage of the respondent's patient expired prior to surgery.

7. Status of patients after surgery

Out of the 249 respondents, 115 had surgery already. And 74% of them are doing well and thriving, while 20% of them will still be needing another surgery.

8. Home Address of Operated Patients vs How Surgery was paid for

Considering that the Philippines is made up of more than 7,000 islands, and majority of heart centers that cater to pediatric cases are in the NCR region, we would like to see where the patients are coming from.

The graph on the left shows that majority of the 115 patients operated on came from Visayas Region. Based on tabulated data, 50 are from the Visayas, 28 from NCR, another 28 from Outer Luzon, 7 from Mindanao area and the Others refer to patients who are either residing outside of the Philippines or with the Creator already.

The private patients and those under Philhealth were further broken down to sub categories: if Private Patient, paid thru fundraising activities, or medical or family loan or thru own savings. And for those under Philhealth Z-Benefit, only 2 types of CHD are accepted - those with TOF or with VSD. And both categories can either grant the families with zero billing, that means patient will not pay anything for the surgery under certain criteria or co-pay, that means they will pay a certain participation amount for the surgery.

This graph shows the different hospitals that catered to our pediatric cardiac patients and the number of cases done in each hospital.

After studying the data, we noticed that Vicente Sotto Medical Memorial Center in Cebu was not represented. We have personal knowledge that they cater to pediatric patients as well.

This next graph shows how surgeries were paid for in each hospital. More than 25% of the patients were operated through foundations and performed outside of the Philippines.

10. Classification of CHD Cases Operated on

The table on the left shows the classification of CHD according to Children's Heart Institute. To ease the groupings of the different diagnosis given by the respondents, we decided to adapt this grouping.

The graph on the left shows the number of cases operated on by type of CHD. For those who listed down more than one type and affected multiple areas of the heart (i.e. ASD + Pulmonary Stenosis), they were counted under the MULTIPLE Type.

The graph shows that majority have CHD that affects multiple parts of the heart. Next, we have more of the ASD or VSD type.

The table above shows the different surgeons identified by the families as the one who performed the surgeries on their kids. However, it must be noted that the names with * are not actually surgeons. A quick search on the internet and personal knowledge identifies them as pediatric cardiologists who perform interventions on certain cases (i.e. PDA, VSD, ASD device closure). Personal knowledge also identifies 4 Cebu-based thoracic cardio vascular surgeons who "take interest" in pediatric patients. With personal knowledge and this survey, it is safe to say that we have less than 20 cardio surgeons who "take interest" in addressing pediatric cases in the Philippines.

One can see that the prominent color for waiting time in the different modes of paying for the surgery is the green one - 1 to 5 years after surgery. Computation shows that out of the 115 kids operated on , they have an average waiting time for surgery of 1 year and 8 months.

The graph on the left shows that even though more than half of the operated patients came from single income households, it did not stop the parents from finding ways on getting their kids that needed surgery.

This graph further shows the distribution of the families on who they were able to get the surgery, either as private patients, under Philhealth benefit or through foundations.

This survey was made possible by the cooperation of the different heart moms and dads in our different support group. Their cooperation has given us a glimpse of how families going through congenital heart defect (CHD) in the Philippines are managing this common birth defect but with minimal awareness.

This survey result was made possible by the brains of fellow heart parents Engr. Roma Caraig, Diana Alvarado and yours truly.

This survey was born out of frustration of not finding CHD data for Philippine setting. Our hope is that this will not be the only one. This is only the beginning to raise awareness. This will help gauge if the Philippine health care system is indeed equipped to take on this invisible community. What do you think?

For part 2, we will incorporate some of the data here with the data we got from FOI. Stay tuned for our disturbing realization.

Geek Heart Dad and Heart Warrior on a weekend 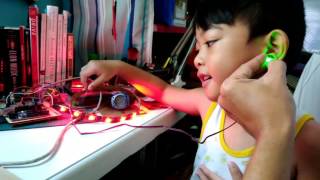 Sending off Dann and Julia

Geek Heart Dad and Heart Warrior on a weekend